This afternoon I was able to read 8 c-ringed LBBG's, which is a nice number for here. 3 birds were new ones for this year, but I had seen all of them in previous springs. The following birds were seen: 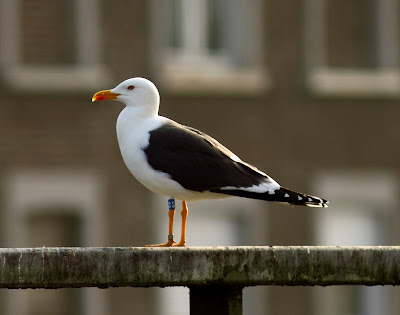 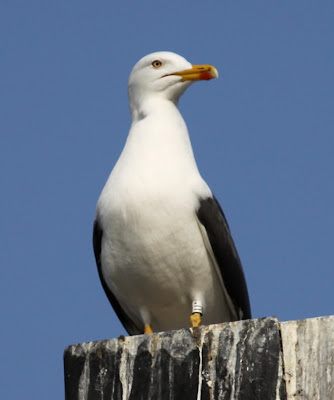 LBBG white U.1 (RJ Buijs), first observation this year, last spring I saw this bird 4 times between April 4th and May 2nd (this last observation was made in one of the breeding colonies in Vlissingen).
Posted by Simon at 12:13 PM 2 comments:

Today I had only little time and made a short trip to some of the best patches in Gent. Many LBBG's present, and lots of new rings. In total I managed to read 8 of them (all from RJ Buijs), of which 3 were new ones:
white J.J
white U.U
white F.G
red E4
red EB
red HY
yellow 8Y
blue 22

Also nice was that Black-headed gull yellow EHNP (T Audenaert - G Spanoghe) was still present, I hadn't seen that one since the end of January.

I also visited the breeding colony of Black-headed gulls at Molsbroek, Lokeren, where I saw one c-ringed bird, yellow EEEY (locally ringed, 2 years ago). 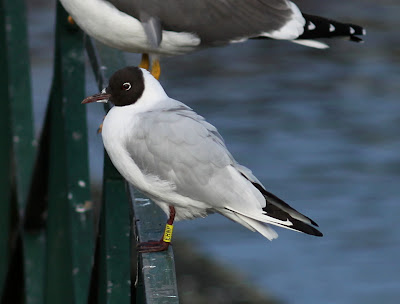 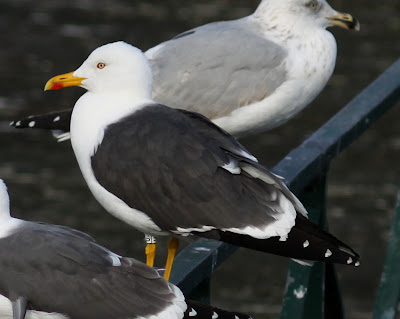 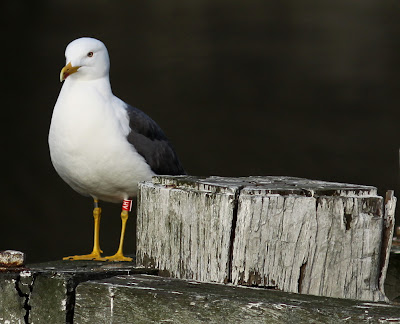 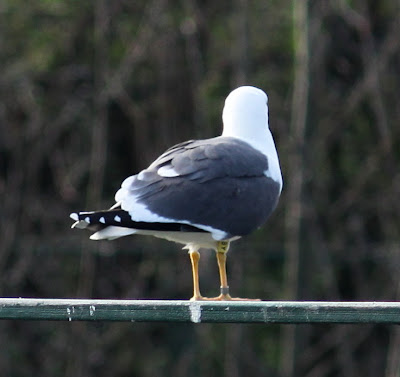 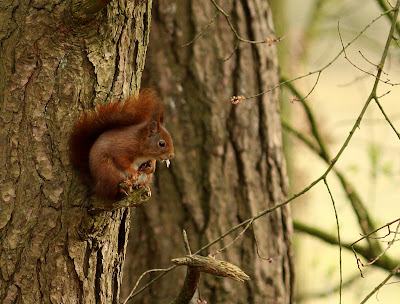 Yesterday, on a trip through Gent, I was very pleased to find several newly-arrived LBBG's, of which a few are well known to me. The first c-ringed bird however was a Belgian-ringed Herring (blue M.LAF), a very nice sighting since this is only the 2nd time I see a bird from this project here, most of them seem to stay closer to the coast. Later on I found 7 c-ringed LBBG's, all from RJ Buijs: blue HF again, blue GF (new bird to me), red MT (6th sighting, and 3rd spring in a row), white K.P (new), red E4 (12th sighting, 3rd spring here), and the pair red LF (18th sighting, 3rd spring) and white M.8 (12th sighting, 3rd spring).
With warmer weather expected the following days, more birds will probably arrive. 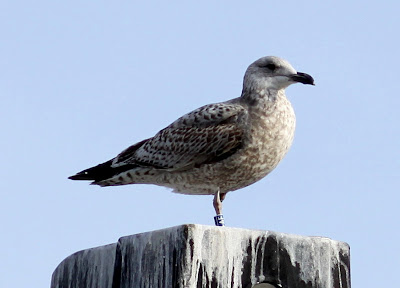 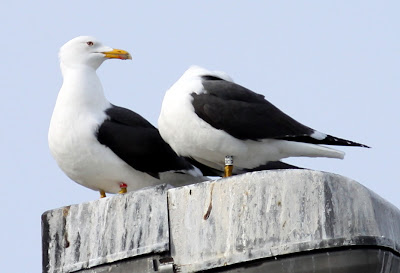 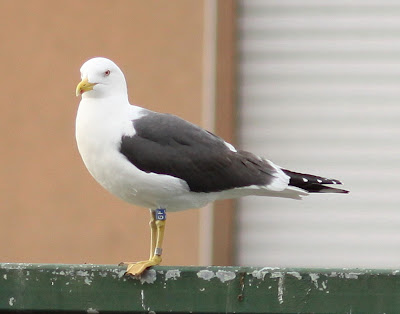 Another short tour around my patches in Gent, on which I could read 3 rings: Black-headed gull white VSH again, but finally close enough to get decent pictures; LBBG blue HF (the 12th time I see this one, and the 3rd spring I see it here, I last saw it on July 7th last year, it hasn't been seen since then); and finally Herring gull yellow W3 (my first sighting). Very enjoyable again, I hope to find time to look for more c-ringed birds in the next weeks. 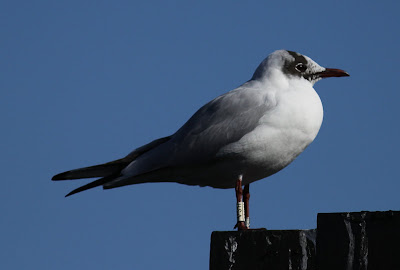 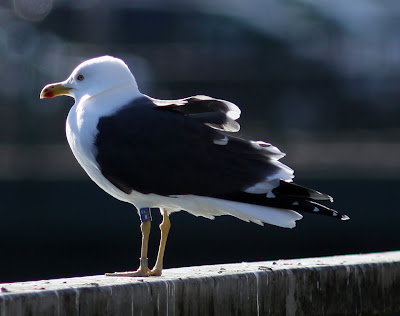 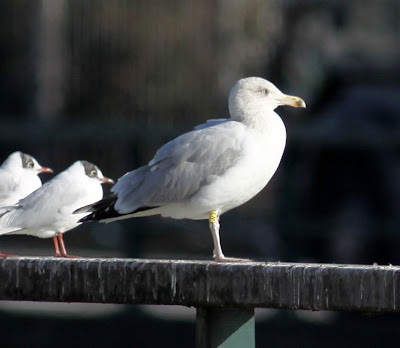 Herring gull yellow W3 (RJ Buijs), my 1st observation of this bird.
Posted by Simon at 10:40 AM No comments:

Back in Gent after a superb four-week holiday in Thailand (maybe I will post some pictures later). Today was the first day I was able to look for rings, and I was hoping to see the return of the first Lesser black-backed gulls. I soon saw some of them, and just a little bit later the first ring was already found, so they are definately back, truly a great sight! The first bird was white Y.H, my first observation of this bird (it wintered in Spain the past 2 winters). Also there were the Danish Black-headed gull white VSH, and a Belgian metal-ringed Herring gull which I saw there in November too.

Next stop was the Blaarmeersen, where I was very happy to see LBBG white H.K, a well-known bird to me. I saw it for the first time there in 2003 (it then wore a Spanish orange ring), and then again last October. Later this winter it was seen in Pinto, Spain (J Marchamalo), and now back in Belgium, on its way to its breeding grounds! I also saw white N.S there, and RJ Buijs just informed me these birds are partners! With this very succesfull day in mind, I will try to find many more c-ringed LBBG's this spring. 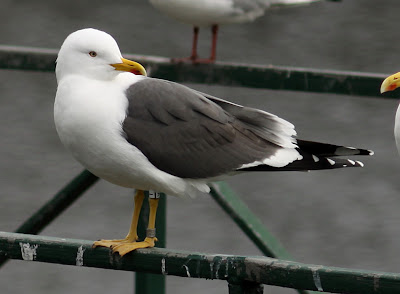 ad LBBG white Y.H (RJ Buijs), my first observation of this one. 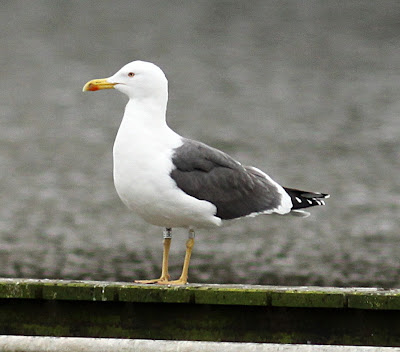 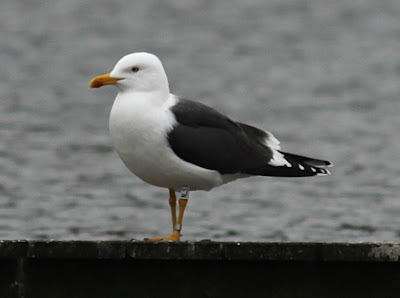 ad LBBG white N.S (RJ Buijs), my first observation, this is the partner of white H.K.
Posted by Simon at 1:04 PM No comments: