The past week I saw a few nice colour-ringed birds, but unfortunately most of them were too far away to take pictures. Among them were a French Black-tailed godwit, a Dutch Spoonbill and a Belgian Mute swan.

Today however, I found a cormorant with a white ring in the nature reserve "Bourgoyen-Ossemeersen", and it turned out to be a bird which I saw there back in 2007! The bird was ringed as a pullus in the Netherlands in 2006, and I didn't see it since that observation in July 2007. I hope it has been seen somewhere in the meantime, and I'm waiting for the life-history now :-)

Fewer LBBG's around now, but despite this I still managed to find two new ones, and some of the regular birds were seen as well. 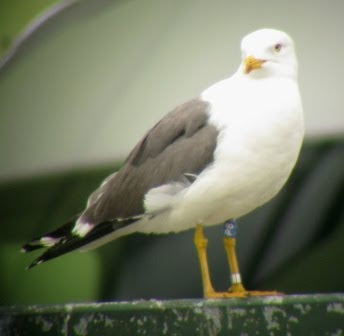 LBBG blue P6 (F Roels), I saw this bird three times in March last year, and now it has returned to Gent. 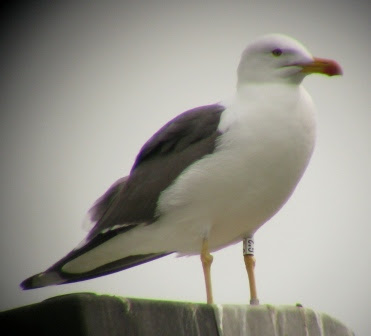 LBBG white G.2 (RJ Buijs), a bird which has appeared on this blog before, it still hangs around in Gent, and can be found on the same streetlight most of the time. 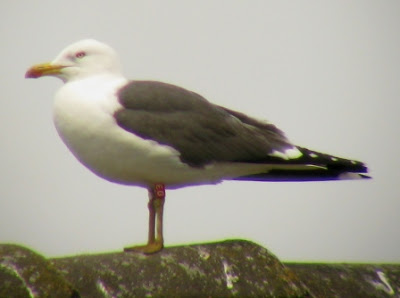 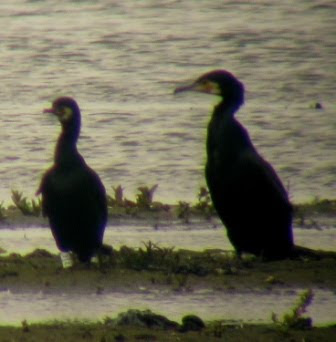 And another day in Gent...

Many gulls at my patches today (110 LBBG checked: 7 colour-rings including 1 new one; also 1 Belgian metal-ringed bird read). A nice surprise was the return of blue BBAH, a bird from the colony of Zeebrugge (but breeding in Vlissingen the previous years). The other birds were - not surprising - all from RJ Buijs's project, with still 1 new one (white M.6). Of the other birds, white G.2 was present again, and the final observation of the 3 other birds was April 25th, so it was nice to see them again after two weeks absence. 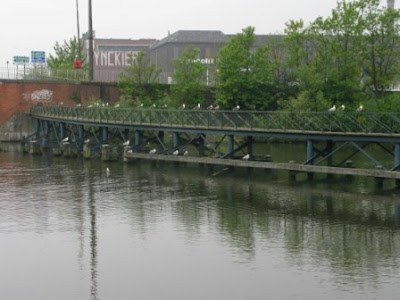 The Tolhuisbrug today, many gulls around! 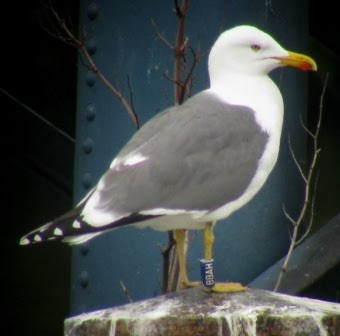 LBBG blue BBAH (E Stienen), my second observation of this bird, the first one was almost one month ago at exactly the same place. 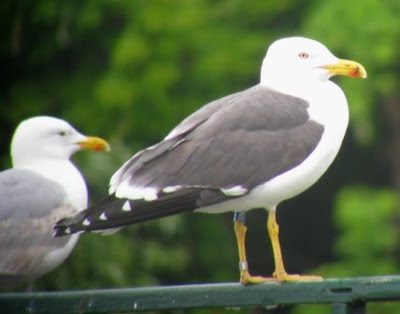 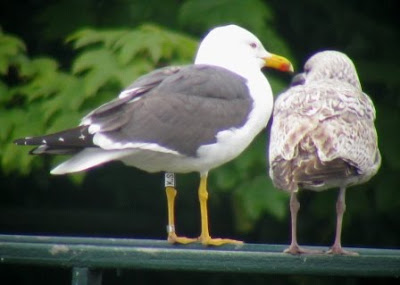 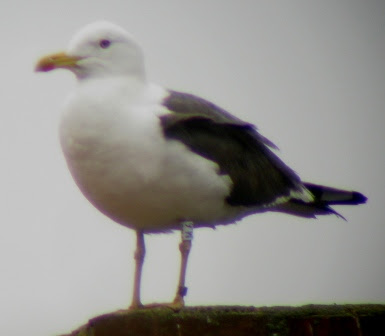 Today I finally found some time to check some of my usual places in Gent. About 60 LBBG's could be checked, and 5 of them were colour-ringed (all of them from RJ buijs). One of them was a new one to me, so there are still new birds arrriving! Hopefully this weekend some more birds! 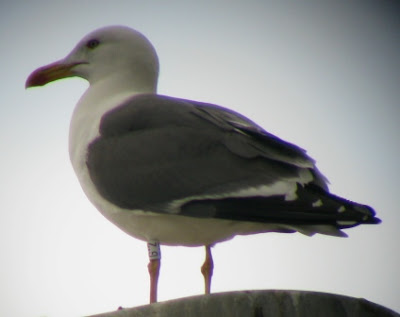 LBBG white G.2, a regular sight these days in Gent. 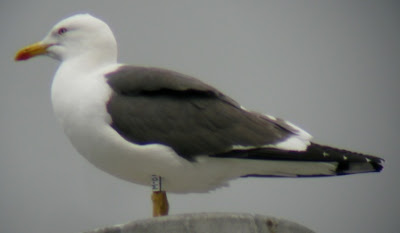 LBBG white M.8, another regular one this spring. 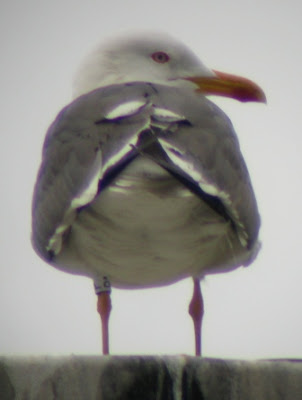 LBBG white P.J, my second observation of this bird (first one was on April 25th) 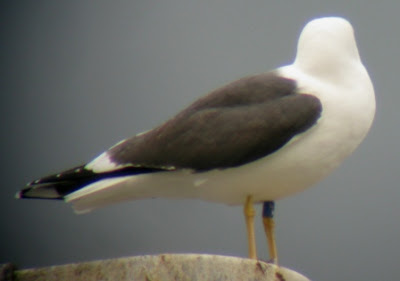 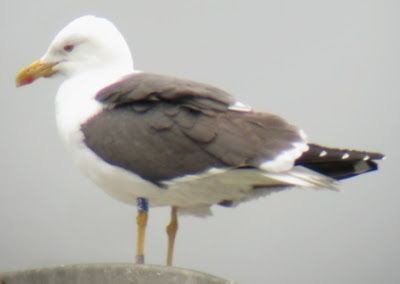 A visit to Vlissingen

Yesterday I visited the breeding colonies of Vlissingen, the place where RJ Buijs has his project. He kindly gave me directions to the best ring-reading sites, and with this in hand (and despite the wind and rain), I managed to read 59 of his rings (29 LBBG's and 30 Herrings), 1 LBBG and 1 Herring of Eric Stienen, and 1 Herring ringed by the North Thames Gull Group).

Since the weather was really bad, not many gull-pictures worked out well, but I also made some pictures of how the places look like, maybe nice for ring-readers who often see these rings, to have an idea of where these birds come from :-)

Highlights were the Herring gull ringed by the Nort Thames Gull Group, and off course some birds which I saw before (mainly) in Gent, including white U.1: I saw this bird the day before in Gent :-) 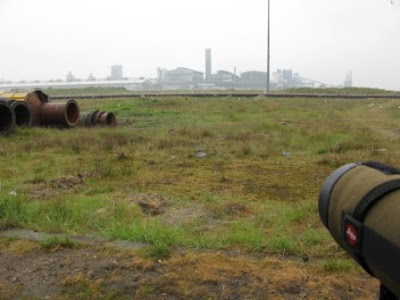 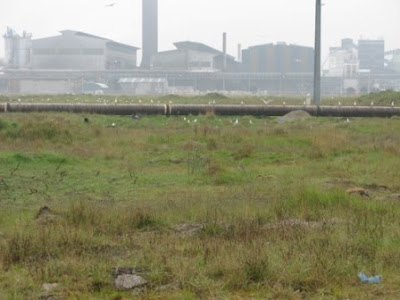 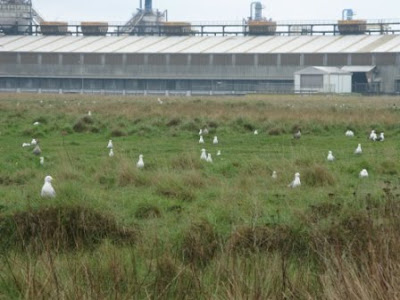 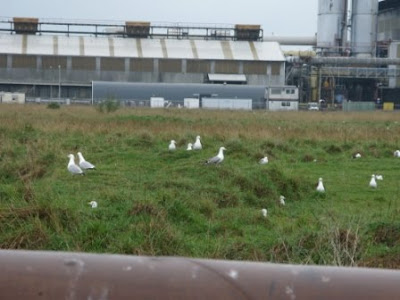 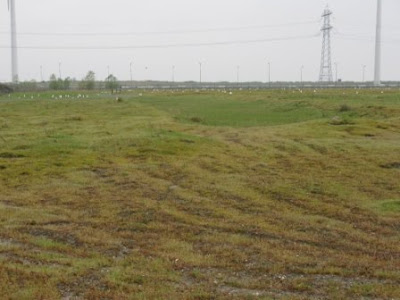 And now some gull pictures: 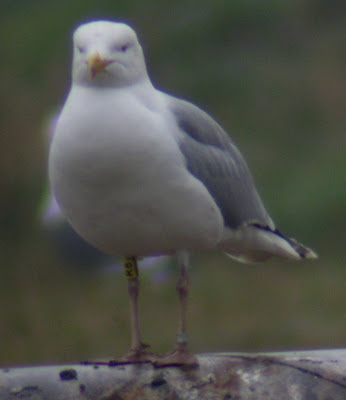 Herring yellow R8 (RJ Buijs), ringed as an ault in the same colony. 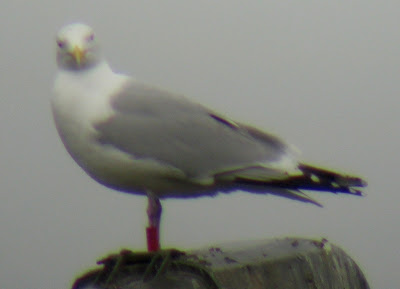 A crappy picture of Herring orange NR6T (NTGG), ringed earlier this year in the UK. 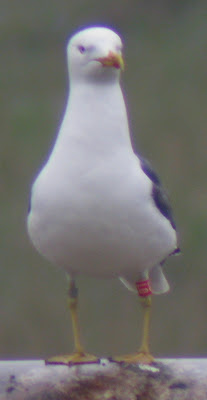 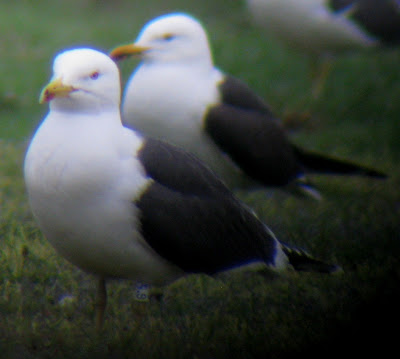 Today in Gent, about 40 LBBG's checked, and among them two Dutch birds (white U.1, seen here before on April 9th and 11th, and red VP, a new one for me). After this, I went to the nature reserve "Bourgoyen-Ossemeersen" to look for some waders. A few gulls were present, and there were two birds wearing a blue tarsus-ring. Unfortunately, they were just too far away to be read, quite frustrating (especially because I don't see these rings often in Gent)! But that's just part of the game I guess... One of these birds didn't look like a pure LBBG, the mantle seemed lighter than it should be, so it could have been one of the few hybrids ringed in Zeebrugge, but I'll never know (unless I get another chance on it). 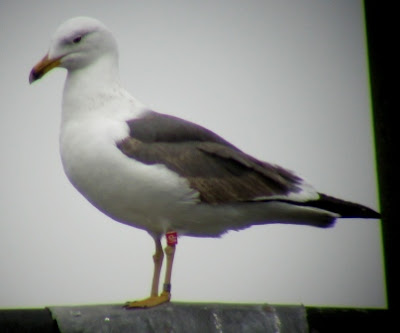 Red VP (RJ Buijs), the only new one today. 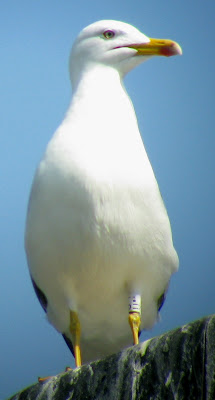 White U.1 (RJ Buijs), a picture of earlier this spring. Seen again today, previous observation on April 11th.
Posted by Simon at 7:29 AM No comments: