Another new ring in Gent

After last week's ring madness at Le Portel, I decided to check my local spots in Gent today to see if any gulls/rings were around. About 70 LBBG's in total, of which 5 were ringed. One new one, a 3rd cal bird (off course from RJ Buijs's project): black GR. There was also one c-ringed Herring gull, yellow N1, a bird that I have seen 3 times in the past two years (always in winter), but the last observation dated already from October last year, so it was nice to see this one being back here, and maybe it will stay again for winter?

After this I went to the nature reserve of the Bourgoyen, where there were still good numbers of Black-headed gulls, and also the Belgian-ringed LBBG LSA.A was still present. Other nice birds here included two Spoonbills and one Little egret. 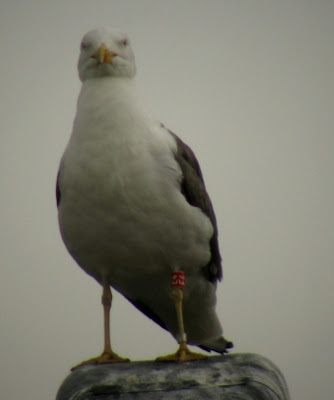 LBBG red E4 (RJ Buijs), one of the regular ones. 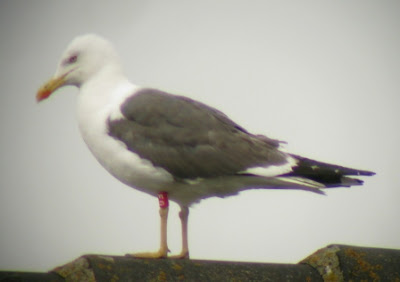 LBBG red EG (RJ Buijs), my second observation of this bird (the previous time I saw it was in May). 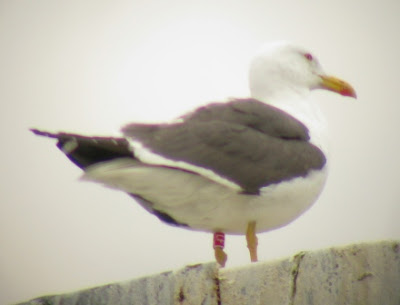 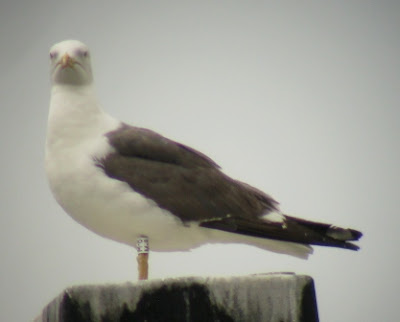 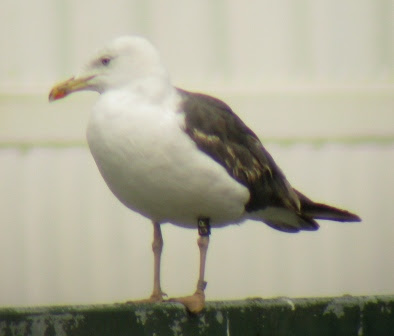 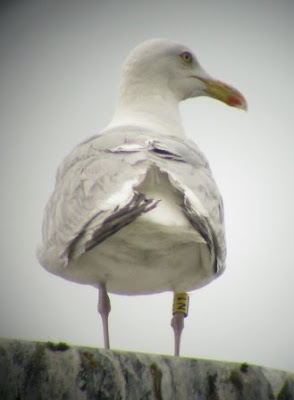 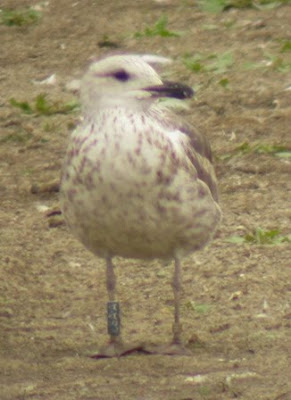 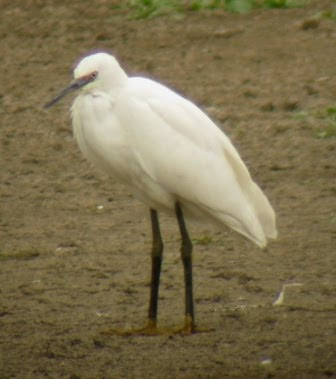 Little egret at the Bourgoyen, we don't see them that often near Gent.
Posted by Simon at 11:58 AM No comments:

A visit to Le Portel

This week, on our national holiday, I made a visit to Le Portel to read rings of MedGulls. I only went there in winter before, so I didn't knew what to expect (but since MedGulls are flying south at this time of year I was hoping for many rings). At first it looked a bit disappointing, but when the tide was low and the mussels where accessible, it was madness :-) 100's of gulls where present, and easy to approach. In the end, I read 149 rings, of the following species: 6 Herrings (5 French birds, one from the UK), 4 Greater black-backed gulls (3 from Norway, 1 from France), 3 Black-headed gulls (all locally-ringed birds), and 136 MedGulls (mainly Belgian and French birds, but also 8 from Poland, 7 from Hungary, and my first ever Serbian ring!). All in all a very nice day (my highest number of rings read in one day so far), and I will probably go back there later this summer :-)

I mainly concentrated on ring-reading, so did'nt take many pictures. A few of them can be found below. 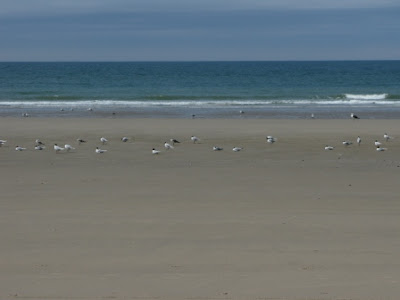 A small flock of gulls resting on the beach of Le Portel. 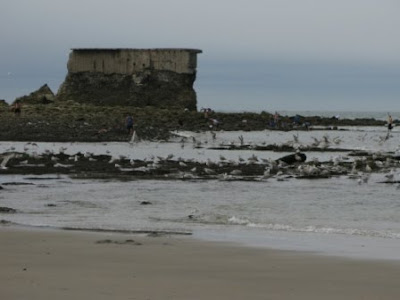 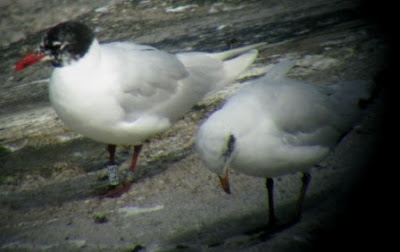 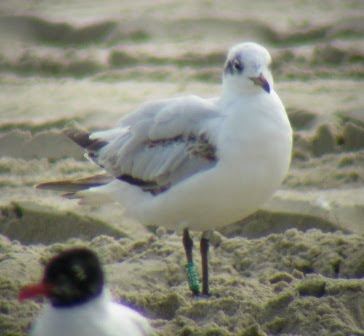 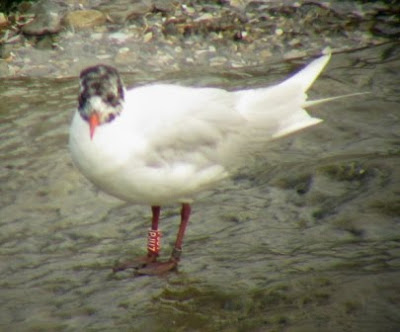 MedGull red PJU7, a Polish one. 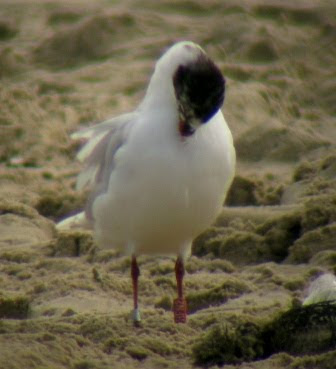 MedGull red HFN2, one of the Hungarian birds. 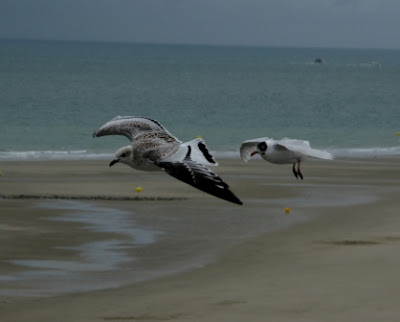 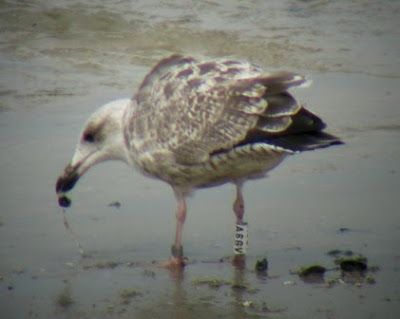 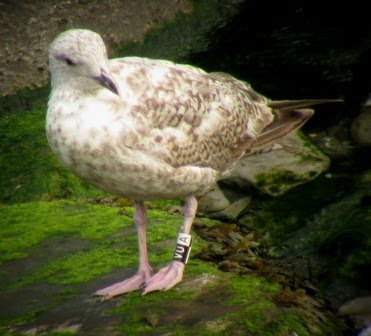 Herring VU A, one of the French birds.
Posted by Simon at 2:03 AM No comments:

Today I visited the same places as yesterday, as well as some other sites. 3 rings could be read, one of them was a 2nd cal LBBG, ringed in the colony of Zeebrugge last year! Very nice to see such a bird, my first immature LBBG in Gent from this project. The other ones were blue ones from RJ Buijs, again including 1 new ring (the other one was blue HF, a regular bird in Gent this spring).

Frustrating was the presence of a pair of Mediterranean gulls, one of them wearing a white ring, but they stood just too far away to read the ring. Two more MedGulls were seen flying south, they seem to be leaving their breeding grounds now. 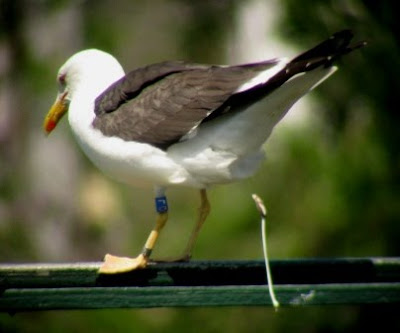 LBBG blue 0J (RJ Buijs), new bird to me, and only the second observation of this bird, the previous one being in October 2008 in Cádiz, Spain. 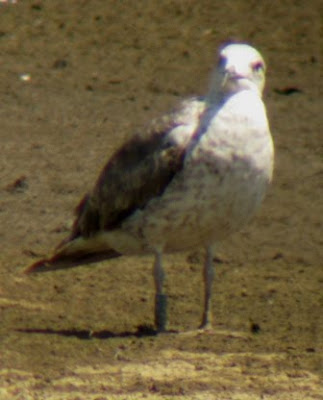 A very bad picture of LBBG blue LSA.A (E Stienen), my first immature LBBG of this project in Gent!
Posted by Simon at 12:19 PM No comments:

Today I was able to visit my regular places in Gent, and although I initially did not find a single ringed bird, in the end I saw 4 Dutch ones, including 1 new one. Also present were some Black-headed gulls, but no rings so far... 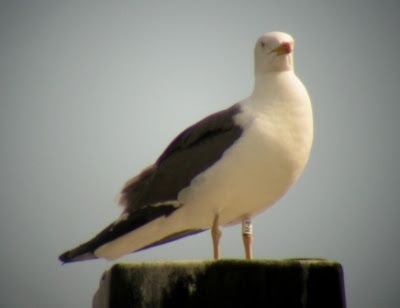 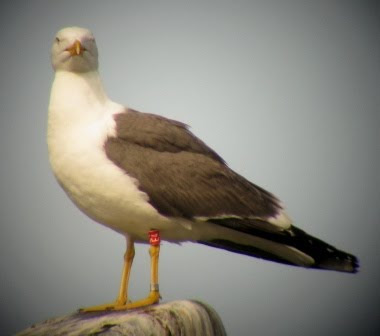 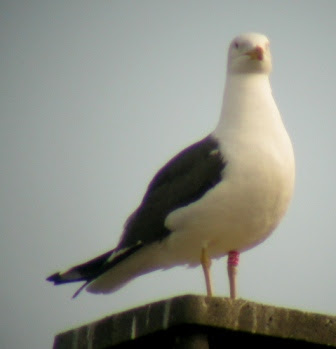 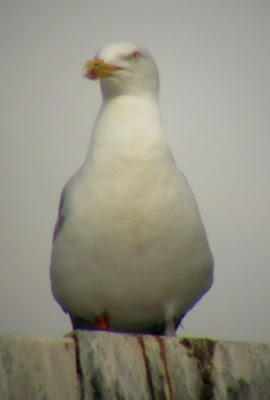 Herring orange O9 (RJ Buijs), nice to see a colour-ringed Herring gull again, my second observation of this bird, the previous time was in July last year.
Posted by Simon at 1:09 PM 2 comments:

With temperatures reaching 34° C today, and high temperatures for the last week, I didn't went to look for rings. Instead, I went to look for butterflies and dragonflies, and will post some pictures later this weekend. Two weeks ago only one ring was present in Gent (LBBG blue GV.AL, one of the very few Belgian rings seen in Gent). However, Geert Spanoghe saw a couple of Dutch-ringed birds last week, so I'll try to get there one of these days :-)

Other good news was Geert's discovery of a small colony of Herrings and LBBG's, in the harbour of Gent! Maybe next week some birds will be ringed, so keep your eyes open for these birds! And finally, this year's first colour-ringed juvenile Black-headed gull was also seen in Gent, and since more than 200 birds have been ringed in Belgium in the past few wekks (mainly juveniles), more are expected (I saw one bird last year, when only a small number of birds was ringed)! These birds have yellow rings with a black 4-letter code (same rings as those from the Molsbroek-project).
Posted by Simon at 10:56 AM No comments: