When I drove home this afternoon, as I was approaching Gent, I noticed a Greater black-backed gull landing on a street lantern and immediately noted a large c-ring. GBBG's are not very common in Gent, and I had never seen one with a c-ring here, so I stopped the car and quickly took some pictures. Luckily the code was readable, and it turned out to be blue J9MN, a bird ringed in 2007 in Norway. A very nice surprise, and my first Norwegian bird in Gent too. Earlier today I had seen two of our wing-tagged Marsh harriers, I will try to put some more pictures of these birds later on. 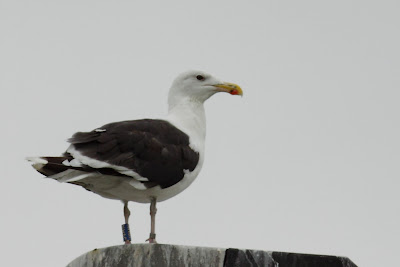